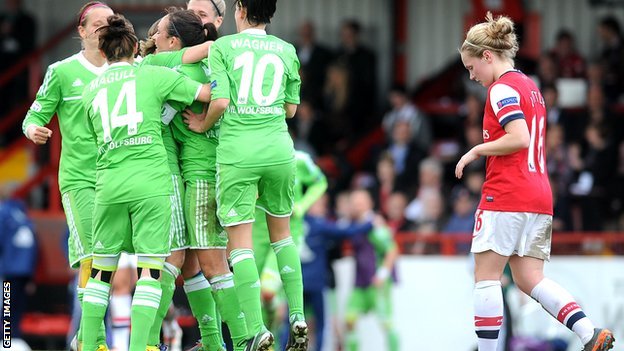 Arsenal Ladies exit the Champions League, after losing 4-1 on aggregate against Wolfsburg in the semi-final, denying them the opportunity to play at Stamford Bridge in May.

In the second leg, Wolfsburg striker Wagner put her team ahead after heading the ball into the net. Arsenal then equalised when midfielder Jordan Nobbs powered a 20 yard shot inside the far post. The Gunners nearly went ahead with a chance scuffed by Ellen White. However Wolfsburg went on to seal their fate with a rebound from a penalty after Little handled the ball in the box.

This is the third sucessive year in which Arsenal Ladies have been knocked out in the semi-finals of the Champions League competition. Despite disappointment the Gunners have the chance to bounce back with an FA cup semi-final against Liverpool on Friday.